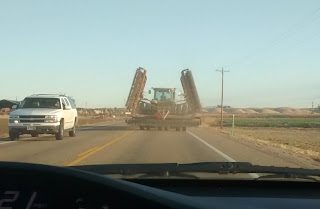 Lately I spend a lot of time in the car - on average, 100-120 miles a day. (Yes, we need to move.) Being in the car is one of my least favorite places to be. This may sound contradictory to some of my habits in a past life. Before I was married, when I needed time to think or work out a problem, I used to go for (long) drives. I no longer do that. It isn't because I no longer have problems but because it isn't convenient to hop in the car and drive to Nephi and back at 1am. Nowadays, the number of minutes I spend in a car seems to directly correlate with the amount of stress I feel.  Every minute seems like wasted time that could be spent doing something more productive.  (If anyone has cures for that stress-inducing thought process, please share!)

This morning, we got out the door 5 minutes later than I'd wanted to. Usually, we go a more scenic route with seemingly more polite fellow travelers - (Shout out to Middleton!) - but the risk of getting stuck behind a tractor (as evidenced above). Since we were late, I felt we needed to take the faster route. However, as we went to turn on the road going that way, a school bus turned in front of us. And...that school bus stops at a stop with a lot of kids - at least 5 minutes stopped and backed up traffic with stressed out drivers in the aftermath. I screamed and slammed my hand on the steering wheel and decided to continue with the slower, more peaceful route but risking being late. (Remember, I'm stressed out...hence the extreme overreaction to something so trivial...and being late is one of my biggest pet peeves.  I get certifiably crazy about it.)

I cooled down after a couple of blocks and got to thinking, trying to find a silver lining.  I remembered back in high school, a friend talked about how sometimes the slow person driving in front of you may be a little divine intervention to slow you do and help you to avoid an accident or some other pitfall in your commute.  Maybe, just maybe, if we had gone that other route something bad would've happened - the sun glare was particularly bad this morning and that route definitely has more pull outs and merging traffic that can be difficult when you can't see.

Are there other times in life where we have a particular route in mind and then some deal-breaker appears.  And maybe that deal-breaker is a manner in which the spirit to works to "hedge up the way."  For example, you are pursuing a new job that seems perfect but then some detail comes out that there is just one little part of the schedule that will not work for your schedule.  No matter how you juggle or what you do, you can't get it to work and need to withdraw your application.  Maybe that job wasn't meant to be.  Or you want to have a baby but it isn't working out so you decide to pursue a residency, then after getting fully on board for that route, you find out that you are pregnant and you are so confused by all the re-direction in life.  I can't think of a personal example, but I'm certain this can happen with our kids and extracurricular activities.  It can be so frustrating to have to change directions but sometimes it is because it is what Heavenly Father would have us do.

As I was getting in the car (feeling late again) to go for school pick-up, I realized I wanted some "good" music rather than the mumbo jumbo on the radio.  My phone doesn't work on the aux jack and the iTouch wasn't charged and the iPod nano only had kid-friendly songs and biochemistry podcasts.  I decided it was worth the 45 seconds to run upstairs and grab a couple of Mercy River CDs.  The song "Blessings" came on and I realized that it went right along with what I was thinking about it.  This stressful and difficult time that we are going through is to help teach us some resilience and help us develop talents and traits that will continue to help us weather the storms of life.
Posted by Unknown at 3:26 PM 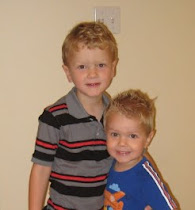 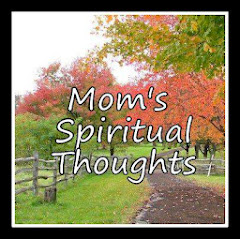